Game of Thrones effect vs. Scandal effect: To focus, or to Tweet?

Pop quiz: You sit down in front of your TV to watch a new episode of one of your favorite shows. Do you, A) Keep your phone in your lap so you can easily Tweet your reactions to every Oh-Em-Gee moment, or B) Commit everyone within a 5-mile radius to total silence so that you can focus on every word spoken by your favorite characters? 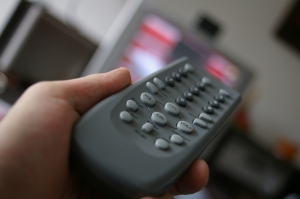 A new study by TiVo suggests that for most of us, the answer is closer to B than A. The digital video recording company asked both TiVo users and non-users about their watching habits and found that a full 3/4 of them (76 percent) prefer focusing on the tube than on any other distractions, including social media. The findings seemed to signal a win for the TV industry, which has in recent years tried (and sometimes failed) to provide interesting “second screen” experiences for viewers — from live polls to suggested Twitter hashtags. Perhaps no show has succeeded so thoroughly in creating a second-screen audience than Scandal, ABC’s political drama starring Kerry Washington that’s chock-full of more twists and turns than a Tilt-A-Whirl. Every week, thousands of fans live-Tweet the show, including its own stars, who are encouraged by the network to participate in the discussion. The show is so heavily live-Tweeted on Sunday nights that TV critic Willa Paskin at Slate was able to understand almost everything that happened in one episode just by following along online.

So is Scandal an anomaly of multitasked viewing? Perhaps. TiVo calls its findings the “Game of Thrones effect,” noting that HBO’s hit fantasy series has so many characters and such a complex plot, that viewers are loathe to turn away, even for a moment. A fully 73 percent of those surveyed said they agreed with the statement: “There are certain shows that are so important to me or so tricky to follow, I make sure not to do other things while I am watching them.”

Perhaps an explanation for this phenomenon is the DVR effect. Scandal is a show that has become one of the rare few that I will watch live, mostly because my Facebook and Twitter feeds will be full of spoilers regardless. That live viewing is a massive, shared experience, and it lends itself to community participation in ways that our more focused, private viewing does not. Other big, live TV events often see similar social media responses — think of the Super Bowl, or even NBC’s Sound of Music production in December. No one wants to read your shocked reactions to the Game of Thrones Red Wedding when you watch it three days later at 1 a.m., so you might as well put your phone down. You’ll need both hands to pick your jaw up off the floor anyway.

2 responses to “Game of Thrones effect vs. Scandal effect: To focus, or to Tweet?”