The wild success of Downton Abbey, a show produced and aired in the U.K. before being imported to U.S. airwaves on PBS, has Vulture asking this week whether the show is the TV equivalent of the Beatles — “the biggest thing ever to hit our shores from the United Kingdom?”. And while Vulture parses the numbers to figure out whether that’s true (spoiler alert: it’s tough to say, but probably not), the question itself suggests that TV-watching Anglophiles are having an impact on current pop culture. 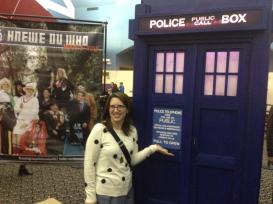 Me, posing with a TARDIS replica in November at the New Orleans screening of Doctor Who’s “The Day of the Doctor” 50th anniversary special.

Look no further than Tumblr to see the impact of two other big across-the-pond hits — Doctor Who and Sherlock. Both shows have had a particularly good year among American audiences. Doctor Who, which celebrated the 50th anniversary of its debut in November, has long had a small but devoted fanbase among the Yanks. It wasn’t until 2009, when BBC America began airing the 5th season of the rebooted series at the same time it aired in the U.K., that the American following of the show truly took off (helped, of course, by the rise of Netflix and the availability of the previous seasons for streaming.) When the show aired its 50th anniversary special in November — bringing back previous stars David Tennant and Billie Piper — it smashed BBC America ratings records, pulling 3.6 million viewers for the show and its encore. Even more amazingly, a single day screening of the special in 660 U.S. movie theaters earned $4.8 million. I attended one of those screenings at a theater in the New Orleans area. Our local AMC had planned to show it on only one screen, and that sold out within the first 30 minutes. It later opened up a second screen, which also sold out. The event drew an impressive crowd of passionate fans, sporting TARDIS dresses and Tom Baker scarves and Dalek pins. It was quite the fandom event.

And then there’s Sherlock, which aired its third season on BBC in early January, and then aired on PBS a few weeks later. The U.S. debut averaged 4 million viewers, up 25 percent from its previous season two years ago. But neither Doctor Who or Sherlock can touch Downton Abbey in the ratings, which has averaged about 8.4 million viewers this season.

Do you have a favorite British import show? Do you think we’ll start seeing more across-the-pond success stories? Let me know in the comments!

Why I can live with TV show spoilers

I just returned from a week-long vacation to the House of the Mouse (aka Disney World), and during my hiatus, several new episodes of my favorite TV shows aired. Links to recaps of these shows have been popping up in my Facebook and Twitter feeds, and it’s been nearly impossible to avoid “spoilers” about what happened. But I am not the type to stick my fingers in my ears and start singing loudly to drown out plot developments.

A few years ago, researchers at the University of California – San Diego published a study that found that readers’ enjoyment of stories with plot twists were not diminished by learning of those developments ahead of time. In fact, they found that these spoilers actually enhanced reader enjoyment. The study didn’t investigate why, but the researchers had a few ideas:

…one possibility is perhaps the simplest one: that plot is overrated.

“Plots are just excuses for great writing. What the plot is is (almost) irrelevant. The pleasure is in the writing,” said Christenfeld, a UC San Diego professor of social psychology.

It’s also possible that it’s “easier” to read a spoiled story. Other psychological studies have shown that people have an aesthetic preference for objects that are perceptually easy to process.

“So it could be,” said Leavitt, a psychology doctoral student at UC San Diego, “that once you know how it turns out, it’s cognitively easier – you’re more comfortable processing the information – and can focus on a deeper understanding of the story.”

I’ve found this to be true of my favorite TV shows as well. I certainly don’t go looking for spoilers, but when I stumble on them, I often find that I can still enjoy the show, because of great characterizations and emotional resonance. Knowing what happens to my favorite characters doesn’t lessen my enjoyment of watching their reactions to it. And in some cases — like with one of my new favorite shows, the CW’s Arrow — learning about spoilers actually increases my enjoyment of the show, because it deepens my understanding and appreciation of the comic universe on which it is based. Knowing ahead of time that (SPOILER ALERT for previously aired episodes) the show would guest star Grant Gustin as Barry Allen, who would eventually become The Flash, helped me better enjoy that character’s place in the show’s mythology. It was just more fun to watch.

The one exception to all this? Reality shows. There is rarely “character development” in the traditional sense, and many shows — particularly reality show competitions such as American Idol and Top Chef — are easily spoiled by the simple knowledge of who went home that week. In fact, the final two episodes of the most recent season of Top Chef sitting on my DVR will probably go un-watched, as I inadvertently spoiled myself while browsing an entertainment website. Once I knew the winner, the allure was gone.

Perhaps spoilers serve an important purpose, as a barometer of the quality of our favorite TV shows. If we can be spoiled and still want to watch, I’d stay that’s some pretty good television indeed.