Clone Club is back, and it is bananas (in a good way)

One of the most exciting new shows in recent memory — Orphan Black, about a group of distinctly different women who happen to be clones, and the various conspiracies surrounding their existence — is back for its second season. And I’m thrilled about this for two reasons: 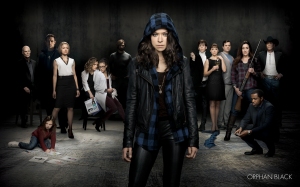 A) No other TV show, besides perhaps Netflix’s Orange Is The New Black, has this many interesting, nuanced, compelling female lead characters. And in the case of Orphan Black, they’re all played by the same person (!), the indomitable Tatiana Maslany.

B) The little-show-that-could seems to have expanded into a full-on phenomenon between Season 1 and 2, and more people are joining Clone Club (a meta reference to the show’s fandom.)

So far, Orphan Black has proven that it still has what it takes to shock, delight and terrify us. No spoilers here, because this is one of the few shows that I enjoy so immensely that it would crush me to know I had given away one of enjoyable twists and turns. Instead, I want to round up some of the early critical acclaim for this show, with a special focus on feminism and gender roles:

Orphan Black is all about a woman, Sarah, and her many, many clones (all played by Tatiana Maslany), so it’s no surprise that the male characters are secondary to the plot. But the men aren’t simply less important to the story than the women. They are less than, full stop. With one exception, the male characters of Orphan Black are purposefully insubstantial, bordering on feeble. This gender reversal is not an accident on the part of the show’s creators, Graeme Manson and John Fawcett; it’s clearly a conscious decision, and it effectively delivers the show’s most potent message about the nature, quality, and persistence of the enemy.

Not enough can be said in praise of Tatiana Maslany’s performance as all the clones, including a type-A soccer mom, a funky scientist, a barely reformed grifter, and a crazy-eyed assassin … Even if these characters weren’t involved in some kind intriguing international cloning experiment, they could support their own shows: Alison, the headband-wearing soccer mom, has a whole Weeds-esque story line about the oppressiveness of suburban bullshit; Cosima, the scientist, has an adorable lesbian romance; Helena, the Ukrainian contract killer, has an unusual religious background and an elaborate history of self-harm. It’s not clones-clones-clones all the time, thank God. These clones are people, see, and they all have lives going on outside of their clone mysteries.

When the show is on target, it speeds forward with confidence and grace, its characters intelligently working their way out of corners just as fast as the writers can paint them into new ones. But the series’ secret strength is in the way it can be surprisingly heartfelt, too. This is, after all, the story of a bunch of women realizing that the lives they thought were their own might be considered otherwise by the United States Supreme Court. Self-determination has always been at the center of great characters, but it’s always been at the center of feminism too. By burying these ideas beneath a steady diet of action-packed adventure and crazy twists, Orphan Black finds the spoonful of sugar to make the political metaphor go down.

Filed under Shows I Watch

Everyone from Denver to Boston seems to be snowed in right now, and cabin fever will soon set in. If you’re all caught up on your DVR and your street still hasn’t been plowed, perhaps now is the time to try out one of those shows your friends have always been telling you to watch. Here are my top picks.

Veronica Mars: Don’t let this show’s high school setting and spunky blonde heroine fool you. This show is classic noir, covering dark topics including murder and rape. But it’s also wickedly clever and features one of the best father-daughter relationships ever to hit the screen. This beloved series ran for just three seasons, so picking it up now won’t feel like a lifetime commitment. Plus, the Kickstarter-funded Veronica Mars movie comes out next month, so this is the perfect time to join the fun. All three seasons are available to stream for free for Prime users on Amazon Instant Video.

Orphan Black: A woman runs into her doppleganger in a train station, only to watch her lookalike commit suicide. This kicks off what has become one of the most thrilling sci-fi series in recent history, starring Tatiana Maslany as the protagonist — and as the cloned versions of herself. The second season comes to BBC America in April, and the first season is available on BBC America On Demand, as well as for purchase on Amazon and iTunes. I was able to watch the first episode for free with my Prime membership, and I was so instantly hooked that I didn’t hesitate to pay the $9 to watch the rest.

Sherlock: If you’ve been on the internet lately (or, ever), you may have noticed that people are uncontrollably giddy about how much they love the BBC’s Sherlock, starring Benedict Cumberbatch as the eponymous detective, and Martin Freeman as his Dr. Watson. There’s good reason for all the chatter. This series is, like Holmes himself, about as clever as it is smug, but the two lead characters have such excellent rapport and chemistry that it’s a delight to watch. Each episode is 90 minutes long, and there are 6 episodes (2 seasons) available to stream for free on Netflix. The third and most recent season just finished airing on BBC America, so if you missed them, you can buy them on iTunes.

Misfits: I stumbled on this lesser-known show via a recommendation from Hulu Plus, which knows my affinity for British dramas. And it has been my favorite “new” show in the past year, even though the first season aired in 2009. It is the story of five juvenile delinquents in the U.K. who are suddenly gifted with special powers after a freak hailstorm. The concept is straight out of comic books, but the execution is sublime. These teenage characters both hilarious and endearing, and the greatest moments come not when they are using their powers, but when they are getting to know each other and themselves. Five seasons (each 6-7 episodes long) are available to stream on Hulu Plus.

House of Cards: This critically acclaimed political thriller makes my list because it seems to have grown on me over time. Kevin Spacey’s performance as a power-hungry Senator from South Carolina is campy, but in the best possible way. Despite Spacey’s energetic performance, the show feels as though it moves a bit slowly, which is why this is a series made for binge-watching. No single episode will stick out in your mind, except perhaps Chapter 8, making the whole first season feel like a very long (but very good) movie. The trailers for Season 2, which will be released on Valentine’s Day, hint at some serious political and personal upheavals, so if you’ve been putting off this show, now is the time to give it a shot. The first season is free on Netflix.

Filed under Best Of, Shows I Watch